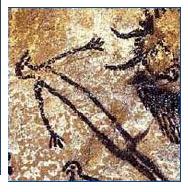 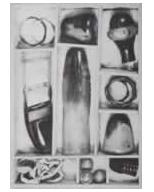 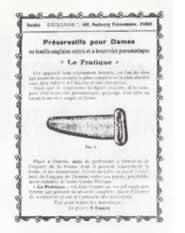 The first traces of protection of the penis back to the year 6000 BC, by the Egyptians.

It is reported that Egyptian soldiers were using sheep intestines or pig bladders to protect themselves against sexually transmitted diseases (drawing). Later (second century BC.), the “condom” was used as a contraceptive, tissue paper or oil cloth, silk or velvet.

The earliest evidence of condom use in Europe comes from scenes in cave paintings in France Combarelles, showing a man and a woman making love with the man’s penis “protected” .(picture)

The Chinese use the oiled silk paper, a sort of sheath, and the Japanese opt for accessories made of turtle shells and leather, called Kabuta-Gata stored in “boxes happy.” These condoms could also serve as a rigid intimate game accessories.

The Italian surgeon and anatomist Gabriel Fallopio the first looks at “condom prophylactic”, that is to say protecting against sexually transmitted diseases.

Born in Modena in 1523, it was he who first described the “sheath of light material, tailored to protect venereal diseases.” Nicknamed the “Asclepius” of his century, this great man was brought to heal Julius II and François Ier. In 1564 appeared the first known publication concerning the description of attempts to use condoms to protect against the “French caries” or syphilis and published under the name “De morbo Gallico.” In the chapter devoted to “safeguarding against syphilis”, Gabriel Fallopio mentions about this invention: “Demum cum coiverit ponat supra glandem and recurrat praeputium” that is often translated by “Only when he has rapports, placed it on the glans and foreskin him back.”

Unfortunately, many addicts tend to translate Latin “coiverit” with “have had an intercourse,” which implies that the condom was used only after the act as a bandage. This invention, called ‘Venus’ glove’ by Shakespeare, was abandoned quickly, and early seventeenth century, a certain Ranchin would rather say: “Better that we do not stay too long with a woman thoroughly devastated and that it is diligent in washing and drying the member, because if one goes to sleep at length, there are more remedies. Finally, members must be straight and not soft and flabby for that, otherwise, he drinks infection as a sponge, and everything becomes useless.”

The origin of the word “condom” is controversial: some think it comes from the Latin word “condus”which means “respect”, others attribute it to its inventor, Mr. Condom or Conton, who worked at the court of King Charles II. In France, Louis XIV (shown here) democratized the use of condoms, although this is forbidden in the country, on pain of jail. At that time, the condom is still in animal gut and is neither very safe nor extremely comfortable.

Lazzaro Spallanzani Italian religious, biologist and physicist, born near Modena in 1729, provides the experimental proof of the claim of the Dutch entomologist Jan Swammerdam in the previous century : the generation requires penetration of the male seed in the ovum of the female. And thanks to an experiment conducted on male frogs: they pose little waxed linen breeches on the penis: that did not prevent the penetration but blocking fertilization. He is also part of the inventors of condom use as a contraceptive.

The marketing and democratization of condoms have developed during this century when, following a conference in Utrecht in 1712, many men came to the conference attracting many women of joy who had brought with them some venereal diseases. A craftsman had the idea to address these problems by inventing a bag of sheep cecum, closed at one end, and use during sexual intercourse. (shown above-cons, with a ribbon). The high demand during this century of profligacy helped the condom to get a role in protection against diseases of the time as the clap, and for birth control. Figures such as Casanova also contributed to its growth.

Also in animal matter, the condom was serviceable and could therefore be used repeatedly.

Object become embellished and decorated, it has nevertheless given rise to many controversies, was dismissed, criticized but also loved and repeatedly in use.

The origin of the word “condom” was awarded to Dr. Condom, its inventor, by the eminent German physician Franz Xavier Swediaur, in his “Traité complet des maladies syphilitiques”. It was not about to refuse the release of an eminent specialist and the history of Dr. Condom was adopted by the authors and encyclopedists Dictionaries: Pierre Larousse, Louis-Nicolas Bescherelle, Emile Littre … We now know that this doctor Condom never existed other than the inventive spirit of Swediaur. Another hypothesis is that the name “condom” comes from Latin “condere”, meaning “hide, protect. “

The rubber condom was born after the invention of vulcanization by Goodyear in 1839. In 1843-44, Goodyear and Hancock engage in industrial production of vulcanized rubber condoms, making it very resilient, washable and reusable. (photo) “… if you want to use a latex condom several times, he must first choose the greater because of its shrinking and washing in a solution of sublimate and wipe each time it was used. After insufflation of air to ensure its integrity and strength and to remove wrinkles, sprinkled the condom using lyocopode bought at the pharmacy or talc that is procured from the local color, and after tossing and turning the condom in this powder is rolled on two fingers to keep away from light, heat and extreme cold. It should also maintain contact with the rubber of fat (oils, greases, petroleum jelly, paraffin), carbolic acid, etc.., which dissolve … “(Lip Tay book of 1908 on preserving sexual).

In 1880, the first latex condoms are produced, democratizing from 1930.

In 1901 appeared the first flavored condoms, colored shapes and the most surprising textures. Hidden in clever packaging, they are even washable and guaranteed for 5 years.

Early in this century has also invented the female condom, called “Practice. ” In 1908, the company Excelsior (poster above cons) praised the female condom: “The Practice, [condom] for women, in English sheet extra tire and rim, [is] like a second vagina protector which guarantees complete security, leaves the illusion of natural and adds to the intensity of sensations. “It has unfortunately disappeared in this form, to be reborn in 1985 as an intra-vaginal polyurethane and be marketed in 1992 in the United States under the name Femidom ®. Today, he is made from nitrile and is marketed in France, Belgium and Luxembourg by Terpan.

At that time disappear condoms from sheep cecum in favor of the latex properties much more interesting.

The automation of manufacturing lines offer a second revolution in condoms made from liquid latex. The first to use these techniques is Bristish Latex Products, which later became the London Rubber Company.

After WW1, the condom is again in sight of the defenders of birth, that face women who want more freedoms and men from the front. Some countries even prohibit the manufacture and marketing of these protection tools.

In 1932 a new American company developing an innovative technique for treatment of latex and marks the beginning of mass production.

During WW2, the U.S. Army decided to equip its soldiers of condoms to fight against syphilis, which had so much trouble before. We discovered a surprising use of condoms: the soldiers engaged in fighting in diverting the use of condoms using these weapons to protect their sand and moisture.

In 1957 appear lubricated condoms in Europe, first in the United Kingdom and then in France in 1961.

In the early 1980s, the onset of AIDS makes condom the safest way to fight against this disease. Its use is so widely reported by prevention campaigns undertaken by public authorities, personalities of the show associations. Its advertising is allowed in 1987, subject to obtaining the marketing approval granted by the French Agency for Sanitary Safety of Health Products, the same as a drug.

Given the urgent health, condoms need to be increasingly attractive. New forms more comfortable, textures, sizes and personalized perfumes, everything is good to democratize the condom.

Since the beginning of this century, trends in condom do evolve and businesses look more and more novelty. Condoms, now for single use, become without latex, low-protein to prevent allergy risk, double or even triple texture, double color, etc. ….

Condoms are far from an area devoid of innovation!