When an artist, an association and a laboratory join forces to talk about a little-known organ

Terpan, the French distributor of male and female condoms, has teamed up with the artist Emma Crews and the association Les Amies des Femmes de la Libération (LAFL) for a Clitoris Party on November 24 and 25 in Poitiers.

The goal? To alert the public opinion on the victims of excision and to sensitize the general public to the prevention of STI and unwanted pregnancies.

The best part? The whole event is organized in the jovial and light atmosphere of a party.

Art in the service of education and prevention

The association LAFL works against prostitution, rape, pornography and excision. The Clitoris Party was created to denounce female circumcision and to promote the prevention of risks linked to Sexually Transmitted Infections (STI). Emma Crews and Terpan intend to fight for these causes at their own level through art, pedagogy and the provision of prevention tools. Both are in direct contact with victims of abuse and the concerns of people who need to protect themselves from STIs: of course the two actors do not evolve and accompany in the same way, but access to protection is central to the success of their actions.

The conquest of female pleasure

“I have accompanied excised women in their process of recognition and these days are a reaction, a riposte that invites us to celebrate our clitorises in France”, says Emma Crews, a British artist living in Poitiers, before adding “As a feminist, my readings have led me to approach the emancipation of women also through the conquest of their pleasure and to take an interest in the female condom. This is where I got the idea to create the sculpture “Ceci n’est pas un vagin”, composed of 1600 female condoms. I wanted the woman’s sex to be recognized as a whole, including the clitoris and its unique role: enjoyment”.

For this Clitoris Festival, Emma Crews has brought out her giant work of 2 meters by 3 meters which had already raised public awareness during the World Female Condom Day last September. The sculpture is accompanied by various explanatory panels whose objective is to de-taboo the sex of the woman and to free the word in a positive and open environment. For this purpose, “Clitoris conversations” are also organized, including an “Apéro Clito” with Deborah Sundahl, American director, specialized in female sexuality and the psychologist and sexologist Philippe Arlin. Sculpture workshop, concerts, exhibitions… will also be part of the party! 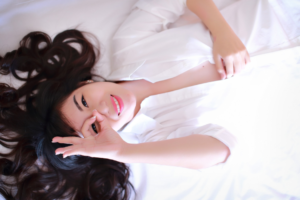 The clitoris and the female condom: two forgotten objects in the spotlight

Enigmatic seat of the female pleasure, the clitoris is since centuries the object of ideological fights. Barely visible from the outside, the clitoris, which Hippocrates called “the servant who invites guests”, is nevertheless between 9 and 12 centimetres long! It remains unknown even among its owners since according to the clinical sexologist Jean-Claude Piquard, 50% of young girls do not know they have one (source: Jean-Claude Piquard, La fabuleuse histoire du clitoris, 2013).

A response to abuse

Between ignorance and abuse, the Clitoris Party is above all a positive and cheerful response to a reality that is much less so: excision, pimping and by extension, the spread of STIs. The LAFL association and Terpan have one thing in common: they are committed to prevention, risk education and the liberation of women through contraception:

“The female condom is not well known and its use is often considered complex. However, it is a tool of freedom and a means for women to take their protection completely in hand. Indeed, it can be used 8 hours before sexual intercourse and unlike the male condom, it is not necessary to remove it immediately afterwards,” explains Kamal Yahiaoui, director of the Terpan Prevention and leader of the female condom in France.

The lack of awareness of the female condom is explained by the fact that it has only been marketed since 1998, whereas the male condom has been around for hundreds of years. 18 years after its introduction, Kamal Yahiaoui reminds us “that the female condom is just as effective as its male counterpart and even more resistant“.

For more information on the Clitoris Party, visit the Facebook page of the event

Info on the female condom: The female condom is sold in France under the brand So Sexy ®. Made of ultra-resistant nitrile and without latex, it is suitable for allergy sufferers and provides optimum protection by covering the external genitalia. In terms of comfort, it promotes sexual stimulation thanks to the nitrile which transmits the natural heat of the body for a pleasant sensation and to the external ring which touches the clitoris.