The kit base : Reducing the Risk of Transmission of Drug-Related Infections

Drug users, especially crack users, are still too much despised by the population and the institutions: evacuated from the Jardins d’Eole last September, they are regularly regrouped in the North-East of Paris and chased away without any support or long-term solution.

Crack use has been growing rapidly in recent years, and users face multiple risks: in addition to addiction and marginalization, crack smokers are exposed to risks of blood-borne infections such as HIV, herpes, tuberculosis, staphylococcus and hepatitis B and C. This is largely due to the exchange of pipes between users. 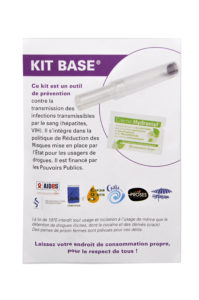 It is with the aim of limiting these risks that a group of 7 associations, regularly in contact with drug users (AIDES, Espoir Goutte d’Or, SOS Drogues International, Charonne, La Terrasse, Gaïa and Proses), wished to develop a device specially designed for the consumption of drugs by inhalation, as the Steribox is for the consumption by injection.

The group then called on the Terpan Prévention laboratory, a player in the STI prevention sector since 1986 and the exclusive French distributor of, among other things, the So Sexy female condom. The laboratory worked for 18 months in close collaboration with associations, the Mission Prévention, the DGS, the ARS and the Paris City Hall to launch the Kit Base in 2012.

The aim of the Kit Base is to change consumption patterns and contribute to limiting the transmission of infectious diseases within the framework of the Harm Reduction Policy, while facilitating support and care for users.

Financed by the public authorities and approved by the Health Authorities, a scientific study conducted by INVS – the French National Institute for Health Monitoring – has established in a report that the use of the Basic Kit divides the risk of HIV and Hepatitis C transmission by 10.

The elements of the kit are not shared, even between couples or with one’s entourage, and the used tubes or tips are recovered by the reception centers.

The Base Kit is composed of 5 elements: 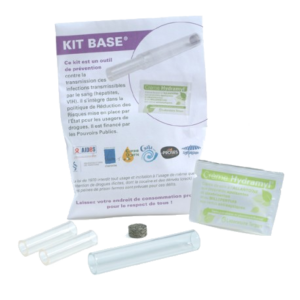 Where to find the Base Kit?

It has been distributed free of charge since 2014 by associations that help drug addicts (CAARUD, CSAPA, ANPAA), either on their premises or during their rounds.

It is available on Terpan Prévention’s online store (Kit Base)

Terpan Prévention is the first laboratory to have set up a large capacity Kit Base distributor (476 kits). This distributor is located at the CAARUD EGO opposite the crack hill (under the A1 freeway) in the 18th district of Paris.

The associations and Terpan Prévention regularly reflect on how to improve the system so that it can improve the condition of crack users.